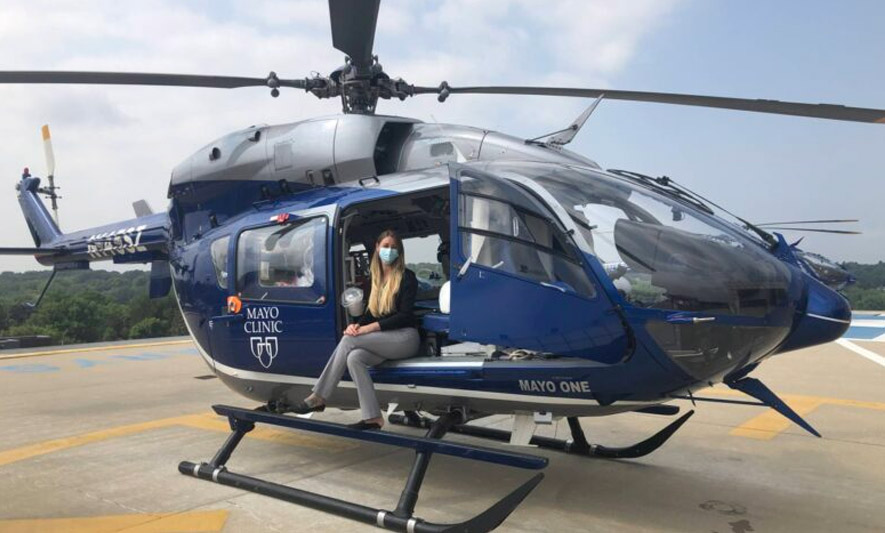 Sydney Kaupinnen in one of the two helicopters the Mayo Clinic uses for inter-facility patient transports.

The way Sydney Kauppinen tells it, she never expected to end up with her dream job as a neonatal/pediatric respiratory therapist at the prestigious Mayo Clinic in Rochester, Minn.

Growing up in Vallejo, she wasn’t really interested in school or grades. In retrospect, she says, her lack of interest in the standardized content of high school and what she suspects was an undiagnosed case of ADHD resulted in her expulsion from school in 9th grade. She eventually finished high school with the help of an independent study program, motivation provided by her mother, Julia, and classes at Napa Valley College.

“I started Napa Valley College when I was in high school, about age 15 or 16,” she says now. “I needed credits to graduate, so Mom and I took a physical fitness class together.” That PE class began a 15-year odyssey, filled with hard work, tragedy and a self-awareness journey that culminated with her graduation from NVC in May 2021 with a degree in Respiratory Care. She also completed associate degrees in Pre-health Science and Natural Science and Mathematics while completing her prerequisites for Respiratory Care.

Still not sure what she wanted to do after finally graduating from high school, Sydney turned her attention to the medical field at her mother’s suggestion, taking dozens of classes and working as first a medical assistant, then an EMT, for the next decade. “College changed me. They teach differently and I was taking courses I was interested in,” Sydney says. It didn’t hurt that Julia was a nursing student at NVC in 2016, taking classes alongside her daughter. Although Sydney also had a father and a brother, difficult family dynamics bonded mother and daughter as they pursued their futures together.

“I still have her nursing program acceptance letter,” Sydney says.

During those years of school and work, Sydney became an advocate for mental health, and says she encouraged NVC students to take advantage of the school’s counseling and therapy resources. “I want people to know that it is OK to have setbacks; it is OK to move at your own pace and don’t let anyone tell you that something you want is not for you,“ she says. “Everyone is going through something and deserves support.”

In addition to her mother, counseling and therapy, Sydney credits the NVC instructors with keeping her motivated.

“There is a particular teacher who helped me more than she will ever know when I returned to NVC after finishing high school,” Sydney said. “Math teacher Ksenia Owens. When I returned, I scored at the lowest level in math, which made me feel hopeless. Ksenia was a great teacher, professional and caring.

“Because of her, I learned math and grew to like it, which allowed me to excel in my medical classes later on. And the respiratory program is lots of math – determining oxygen content in blood, factoring in the patient’s body weight.”

She also has high praise for the respiratory therapy program instructors, saying, “I couldn’t be happier with the support and education I received along the way. They really had to adapt and overcome so many challenges with COVID. I want to tell them I love them all and thank you for everything.”

The respiratory therapy program is rigorous, and in addition to the prerequisites, students take classes in mechanical ventilation, cardiopulmonary physiology, clinical applications, respiratory equipment and more. Sydney is grateful that she was able to learn on modern equipment, like she will actually use in her career.

“NVC had to lend out ventilators [to medical facilities] during COVID,” she says. “I like emergency medicine and the medical field in general. As respiratory therapists, we know a lot about a little, as opposed to nurses, who know a little about a lot.”

As she puts it, Sydney “took forever” to complete her prerequisite classes, but then finished the respiratory therapy program in two years.

Just when the end was in sight, tragedy struck.

“We had just finished final exams and I was wrapping up my last clinical rotation at UCSF with graduation right around the corner,” she said. “That week, my mom died by suicide, and I lost her forever.”

The years of therapy and self-awareness served her well as she faced completing her clinical rotation and taking her board exams in the weeks following her mother’s death.

“My mom was always my motivation and continued to be my motivation. Failing was not an option,” she says. “I refused to give up or take a break. I used the best coping strategies I possibly could. I continued therapy, saw a psychiatrist, exercised, and studied my heart and soul out. I had to do this for my mom. And that’s exactly what I did. I passed both exams on my first attempt and officially became an RRT in July.”

With respiratory therapists in high demand due to COVID, Sydney was contacted after graduation by a recruiter from the Mayo Clinic, who told her of an open position at the world-famous facility. A month later, they flew her to Minnesota for a panel interview and a clinical simulation where they tested her abilities, followed by a tour of the campus.

“I felt so welcomed and it was a great experience,” she says. “I was offered the job that day.”

At the end of November, at age 30, Sydney expects to start her dream job at a Level 1 trauma center.

“The NICU/PICU respiratory therapists at Mayo Clinic do helicopter transport, which is my dream,” she says. “I cannot even express how happy and excited I am for this opportunity.”

Ricardo Guzman, the program coordinator for the Respiratory Therapy program at NVC and Respiratory Care Board President, says Sydney’s vision and determination have served her well, and will continue to do so.

“On day one of the program she shared how much she wanted to work with children, and for two years this desire in her never wavered, and now she is fulfilling her dream to do just that at one of the top hospitals in the world,” he says. “And in the last month of the program, when Sydney lost her mother and she was understandably devastated, she found the strength and the courage to complete the program, pass her two national board exams, apply to an out-of-state facility, travel alone to Minnesota for an interview and accept relocating to a place where she knows no one so that she can start her chosen career. She is impressive.”

While she undergoes the Minnesota licensing process, Sydney has been fingerprinted for her new job, signed a lease on an apartment and, at the end of November, will start the three-day drive to Rochester, and her new life, with her dog Mia and cat BB riding shotgun.

“In the medical field, you’ll never feel fully prepared, and NVC prepared us as much as they could,” she says. “Real learning happens on the job. You have to approach your job with an open mind and acknowledge you don’t know everything. Mayo is a teaching hospital, so I’m sure they will really challenge me.”